Weapons and armor can be improved 100% better. Increases Fire Resistance by 50%.

3rd masks and helms display in The Mad Masker Room in the Hall of Oddities.

The Ratway Vaults in Riften

Location in The Ratway Vaults 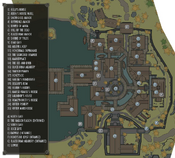 Riften on map
Retrieved from "https://legacy-of-the-dragonborn.fandom.com/wiki/Welder%27s_Helm?oldid=67104"
Community content is available under CC-BY-SA unless otherwise noted.