Visage display in the Upper Gallery.

Found in Dragon's Fall during the Shattered Legacy questline.

Contrary to a normal enchantment the Treads of Wulfharth add their enchantment in the form of a buff. This way the item itself can be enchanted by the player normally on top of that.

Wulfharth's Path adds a 5 - 40% increase to movement speed and reduces falling damage by 5 - 40%. The magnitude depends on the number of pieces from the set that are equipped. 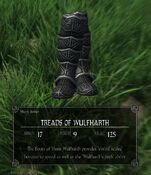 Dragon's Fall on map
Retrieved from "https://legacy-of-the-dragonborn.fandom.com/wiki/Treads_of_Wulfharth?oldid=61996"
Community content is available under CC-BY-SA unless otherwise noted.