The Excavation of the Ruins of Rkund (SSE)

Completed the The Excavation of Windcaller Pass

Second excavation, available 10 days after The Excavation of Windcaller Pass.

Join up with the Excavation at Rkund.

The excavation site is south-west of Riften up in the mountains. An easy way to reach it is going through Darklight Tower, when exiting at the top of the Tower follow the path to the left until you see the Excavations camp.

The following steps will repeat for a total of three dig sites. The third time the entrance to Rkund will be uncovered.

Survey for an optimal dig site.

Open up your inventory and use the survey tool you received. A pop-up will say how far away you are from the optimal site.

The first time, it is a building to the north.

The second time, it is a building to the east behind the main tent.

The third one is next to the Dwemer Dig Site.

When you hit the right spot a banner will appear marking the place.

Bring the survey tool back to Marassi.

Return in a couple of days or help with the dig.

You can either wait or leave the site for 3 days; or you can help digging (that's considerably faster, it takes 12 in-game hours). Either way, the quest will update after that.

Check in with Marassi.

Return to the excavation site and speak with Marassi. The first two times he will reward you with some Dwemer Fragments.

When returning to him for the third time the entrance will be laid open and you can explore Rkund.

Explore the Ruins of Rkund.

Make your way past the enemies. Straight up a set of stairs is a large room with a square pit. At the bottom is a Cog on a pedestal. The members of your exploration team will suggest you slide down. Jump down the pit (there is a ledge about halfway down) and pick up the Cog, the pit will fill up with water, giving you a way back up.

Show the Cog to Madras.

Show Madras the Cog and he'll explain that it is actually a key. You'll need to find others and where they're used.

Find the Cog Keys and where they are used.

The two keys can be found in the Hall of Puzzles and in the Magma Silo. Continue to the north until you reach a large cavern inhabited by Falmer, with walkways leading down.

Follow the walkways all the way down. At the bottom of the cavern will be a passage to a room to the west. There is a large door to the Hall of Puzzles and another passage leading north. Ignore the door for now, go through the passage and make your way down the pit to retrieve the Rkund Journal in a backpack floating in the water. The Journal explains the puzzle you need to solve. Make your way back up and enter the Hall of Puzzles.

The puzzle is made of lots of parts that will resemble a giant cog once completed. There are 12 buttons that will move different parts. Pushing a button while a part it controls is in movement will only move the other parts. You can solve it yourself given enough time or follow the hints in the Journal. Leaving the room will reset the puzzle. 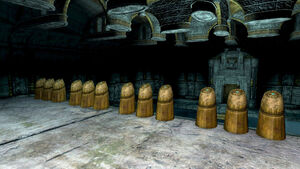 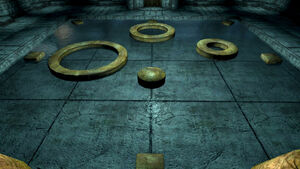 You can also press the buttons in the order indicated (from left to right): 1, 3, 4, 10, 9, 7. After pressing each button, wait until everything stops, then press the next, etc. 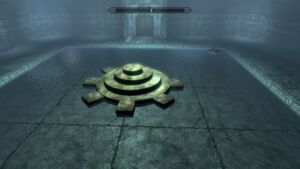 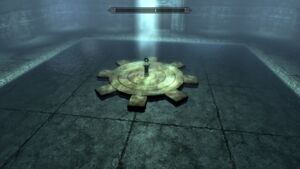 When leaving the Puzzle room with the key, flip the lever at the wall to the left to unlock the Sepulcher room. Go all the way back up the walkways and enter the Sepulcher to the west.

When entering the room all guildmembers will enter the room with you and a cutscene will start playing. This scene is a strong reference to the Wizard of Oz, where the Wizard is now portrayed as a giant floating Dwemer head which calls itself "The Great Kaz". When the head disappears, the gate behind it will open and some treasure chests can be looted. This is also where you meet Eggelmann who will continue to follow Madras around. On a table you'll find the Rkund Control Cube, make sure to pick it up.

After leaving the Sepulcher, go down one level, take the ramp to the west to reach the top level again and go to the Magma Silo to the east. Nobody will follow you in.

The easiest way to reach the top is to use the Rkund Control Cube on the switch at the entrance. This will add a portal that simply brings you to the top. Pick up the third Cog key from its pedestal, use the portal again and leave the room.

[Doing it the hard way]

Enter the Silo without using the Cube. On the opposite side of the room is a lever. Once you pull the lever platforms will start moving and the lava will rise. You need to jump from one platform to another until reaching the top of the room. There is a ledge with a locked door and another lever. Use it to open the gate and go down the corridor to the third Cog Key. The lava will have lowered and now you can jump back down.

Place the three Cog Keys in their receptables on the medium level of the Cavern.

The door is located directly below. You need the Rkund Control Cube from the Sepulcher to unlock the door fully. Use it on the switch to the left of the entrance and enter the maze. 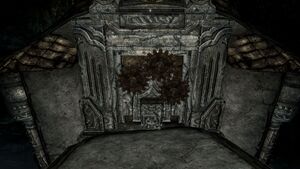 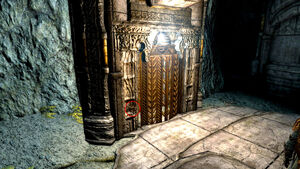 Switch at the door

The maze is actually two mazes separated by a long corridor. Kyle will join you on your trip through it.

There are four ways in, stairwells and holes to drop down. Additionally you'll have to deal with lots of traps, Dwemer constructs and skeletons. Check out the crate before you enter, it contains 100 torches. Pick up as many torches as you can.

In order to find your way, it is best to place torches everywhere you go. There are lots of torch-stands on the walls to place them in. Mark where you've been with them. Generally you need to get pretty far down and to the north once you encounter nothing but skeevers you should be closer. Enter the long hallway that leads to the second maze. Attention however, at the end there is a tripwire which activates a boulder fall trap, and a pressure plate which makes the Dwemer catapults on top of the maze shoot at you.

Short way through: When standing in front of the doors pick the third entrance. Stick to the left walls, after a bit there is a deep drop down, fall down and again stick to the left side. 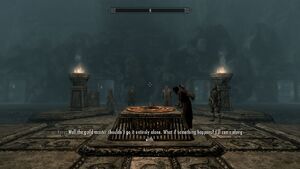 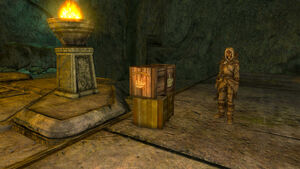 This one is easy to solve as it is on a single level. Choose either left or right and stick with the wall. Follow the walls and after some time you'll emerge on the other side.

A Dwarven Praetorian will attack and the floor is riddled with trap buttons that activate the fire pylons. Defeat the Praetorian and loot its corpse, be sure to take the Rkund Attunement Sphere from its remains. The Attunement sphere is used in the keyhole to the right of the door to unlock it. Depending on your ENB this keyhole can actually be very hard to spot. 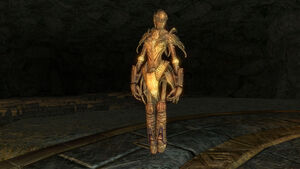 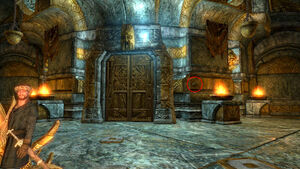 Karagas' Tower is a large player home, straight ahead you see some kind of forge. Get closer to it and the quest will update to the next objective.

Find a way to get the Explorers to the Tower.

Enter the door to the left of the the forge and go upstairs. To the left there is a Dwemer portal which can be used to take a shortcut back to the start of the maze.

Note: To the right of the portal there is a door leading outside. A fast travel point as well as an anchor point for the Dev Aveza can be found there. 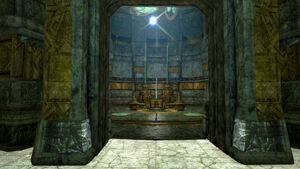 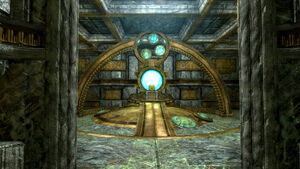 Bring the explorers back through the transport device.

Place the Attunement sphere in the Dwarven Mechanism to open up the stairs and get to the other guild members. Speak to Madras to update the quest.

Lead the group back down the stairs through the portal and down to the forge. They'll all have a chat and the quest will conclude. You can now use Karagas' Transmutation Forge.

Retrieved from "https://legacy-of-the-dragonborn.fandom.com/wiki/The_Excavation_of_the_Ruins_of_Rkund_(SSE)?oldid=87448"
Community content is available under CC-BY-SA unless otherwise noted.