View source
watch 02:05
Wiki Targeted (Games)
Do you like this video?
Play Sound

Lost Vale Relics display on the upper level of the Hall of Lost Empires.

Lower Left Displays on the lower level of the Hall of Lost Empires.

Looted from a Frost Giant in the Inner Sanctum in the Forgotten Vale during the quest Touching the Sky. The door to the giant is located to the left in the first room of the Sanctum and can be opened by activating the altar in front of it, thus placing the Initiate's Ewer on the altar. 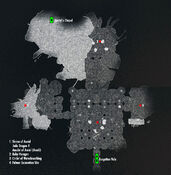