Legacy of the Dragonborn
Register
Don't have an account?
Sign In
Advertisement
in: Item, Jewelry, Amulet,
and 4 more

View source
watch 02:05
Wiki Targeted (Games)
Do you like this video?
Play Sound

1st Row of Amulets in the Jewelry Display on the Upper Gallery.

2nd Row of Amulets in the Jewelry Display on the 1st Floor of the Library.

Jewelry Display (Amulets Section) in the 2nd Room of the Armor Displays.

Found in its unknown form (Strange Amulet) in Hjerim, hidden under a pile of Beware the Butcher! pamphlets on a small shelf during the quest 'Blood on the Ice'. Sell it to Calixto during the quest and it can be looted off the corpse of the murderer in its final form (Necromancer's Amulet) at the end of the quest. 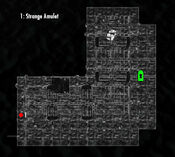 Hjerim map during "Blood on the Ice"

Windhelm on map
Community content is available under CC-BY-SA unless otherwise noted.