Visage display in the Upper Gallery.

The first form is created by combining Vahlok (mask) and Miraak's Soulgem.
It reaches its final form at the end of Shattered Legacy.
The mask is no longer associated with the Visage set as of V5, having been replaced with the Helm of Tiber Septim. As such, its place in the museum has been removed. 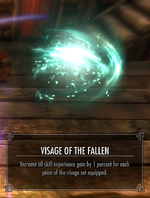 Contrary to a normal enchantment Miraak Reborn adds its enchantment in the form of a buff. This way the item itself can be enchanted by the player normally on top of that.

Visage of the fallen adds a 1 - 8% increase to experience gained in all skills. The magnitude depends on the number of pieces from the set that are equipped. 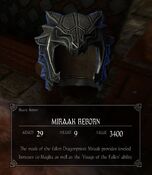