Royal Armory display in the Hall of Secrets.

Kodlak Whitemane's quarters in the Jorrvaskr Living Quarters in Whiterun, in a locked display case. Kodlak carries the key that opens the display case. It can either be pickpocketed from him, [>>>Quest Spoiler Alert<<<] or it can be looted from him when he dies during the Companions' questline.

"The Harbinger's Axe was given to Harbinger Terrfyg by Hircine, the lord of Werewolves. The axe was both a gift and an insult, for while this was a truly powerful artifact, it was also a cruel reminder that Hircine was now controlling Terrfyg’s destiny." 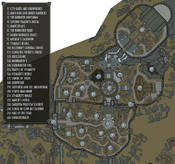 Whiterun on map
Retrieved from "https://legacy-of-the-dragonborn.fandom.com/wiki/Harbinger%27s_Axe?oldid=52057"
Community content is available under CC-BY-SA unless otherwise noted.