Legacy of the Dragonborn
Register
Don't have an account?
Sign In
in: Item, One-Handed Weapon, Dagger,
and 4 more

View source
watch 02:23
Wiki Targeted (Games)
Do you like this video?
Play Sound

Royal Armory display in the Hall of Secrets.

Royal Armory Display in the Hall of Secrets.

Carried by Savos Aren at the College of Winterhold. Must be pickpocketed from him (Misdirection perk needed). 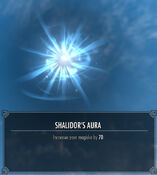 Shalidor's Aura: Increases your magicka by 70.

College of Winterhold on map

"Shalidor created this dagger early in his life and it was meant as a defensive weapon that takes an opponent's magical abilities and transfer it to the wielder. Other mages mockingly called the weapon The Hungry Knife."

Community content is available under CC-BY-SA unless otherwise noted.