watch 03:19
Wiki Targeted (Games)
Do you like this video?
Play Sound

...amulet hums with an unfamiliar energy near this crystal.

4th row of amulets in the Jewelry Cabinet on the 1st floor of the Library.

Ancient daedric display in the third room with Armor Displays.

Falion's House in Morthal, on the arcane enchanter.

The Amulet made an appearance in Morrowind where it had a similar effect. 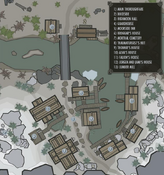 Mothal on map
Retrieved from "https://legacy-of-the-dragonborn.fandom.com/wiki/Daedric_Sanctuary_Amulet?oldid=61422"
Community content is available under CC-BY-SA unless otherwise noted.